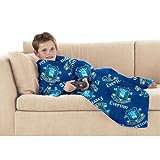 Dream of victories by your favourite team and snuggle up inside this multi crest blue fleece Everton FC blanket. The Liverpool based Everton FC holds the record for the most seasons competing in the top flight of English football. Everton FC was formed in 1878 and were a founding member of the football league in 1888. Everton has a famous rivalry with Liverpool FC and the sides compete in what is known as the Merseyside Derby. Everton have played their home games at Goodison Park since 1892.