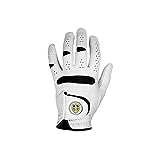 Any golfer that is also a football fan will be pleased to receive this white large Leeds United FC golf glove including magnetic ball marker. Leeds United FC is an English football club that was formed in 1919 after Leeds City was disbanded by the league. Leeds United FC play their homes games at the Elland Road stadium in Beeston, Leeds. Leeds United FC are well known for their home kit of all white and are referred to as The Whites.