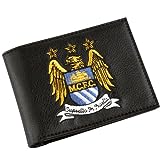 This leather big crest Manchester City FC wallet will make a superb football gift for somebody. This embroidered wallet has compartments for ID, cards and notes and is made from high quality black leather with the teams crest embroidered on the front. Manchester City FC play their football in the English premier league and was founded in 1880. They had a several different names before coming Manchester City FC in 1894. After several years in decline Manchester City FC has seen a recent revival in fortune after becoming one of the richest clubs in the world after they were purchased by the Abu Dhabi Group.