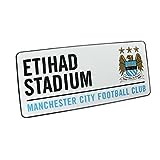 A football gift for a real football fan, this Emirates Stadium Manchester City FC street sign will no doubt earn a place on the wall. Manchester City FC play their football in the English premier league and was founded in 1880. They had a several different names before coming Manchester City FC in 1894. After several years in decline Manchester City FC has seen a recent revival in fortune after becoming one of the richest clubs in the world after they were purchased by the Abu Dhabi Group.